Tax minimisation is not a crime

Simply put, among other things, trusts allow those running their own business (you know, the people that run those things which drive our entire economy) to split their income and minimise their tax.

For typical ‘mum and dad’ type small businesses, it allows mum and dad to effectively delay the point at which they start paying tax at the 37% rate on income earned over $80,000 – by splitting the income between mum and dad. For surgeons earning millions of dollars, it allows them to reduce the amount of their income falling into the highest 45% bracket (on income over $180,000).

As Kerry Packer made clear, anybody who doesn’t do this needs their head read (from 7:15 on):

Trusts can potentially benefit pretty much anyone running their own business.

Of course, this brings us to the envy that Shorten is trying to gorge himself on with his new policy: the fact that PAYE employees cannot benefit from trusts in such a manner. Apparently, this is ‘unfair’ and not ‘equality’ – never mind the fact that PAYE employees are guaranteed a pay cheque and enjoy the benefit of a raft of laws which disincentivise their dismissal (or, in the case of many public servants, ludicrously allow for their ‘permanency’).

All up, Shorten reckons he can raise about $17 billion over 10 years (still nowhere near enough to put even the slightest dent in our budget deficit by the way). Of course, you’ll have to forgive my skepticism on Shorten’s modelling here: after Labor’s mining tax debacle, anything is possible – particularly when you’re dealing with a group of people who aren’t just going to let you take their money away like a grocery off the shelf.

The fact is that every method of earning income has its advantages and disadvantages – and the ability to use trusts to moderately minimise tax is a fair reward for someone who has taken on the responsibility and risk of running a business.

If you’re an employee and you don’t like that, I have some wonderfully simple advice for you: go and start a business. Go and put your money on the line; go ahead and risk the quality and certainty of your ‘lifestyle’; go and get a loan to fund the capital expenditure needed to start up; go and find your own customers; go and put in the effort required to do a good job and keep those fickle customers happy; go and employ your own people to ‘take advantage of’ and set up your own fiefdom; go and spend the time managing those workers and all their concerns – both legitimate and moronically inane; go and research all the laws and regulations that apply to your business so that a public servant somewhere doesn’t hit you with a ‘prescribed notice’ and so that a lawyer somewhere doesn’t issue you with a writ or claim; go and pay for all the administrative costs required to set up the enterprise and keep it running; don’t forget to insure yourself and comply with all the terms and conditions of your policies (lest you have coverage denied)… and when the income finally comes ‘rolling in’, be sure to go and get the professional advice you need to legally minimise your tax in the process.

And when you do, be sure that you understand that this is not a government that needs any more of your money: 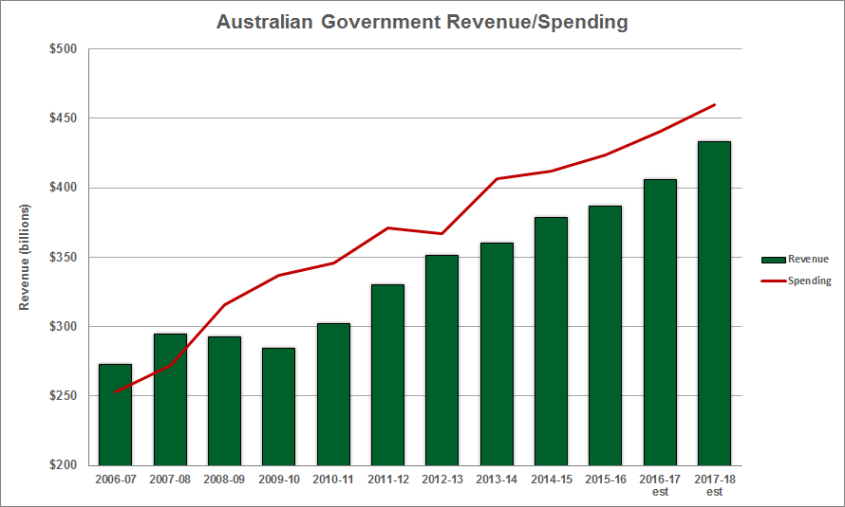 The biggest fallacy of Shorten’s policy is that the proposed 30% tax would apply to all trust distributions.

If Shorten’s real aim was to tax the rich, then why didn’t he at least propose a tax free style threshold before the 30% trust tax applies – for example $20,000 per adult? Or just simply introduce a new personal income tax bracket for those earning over $350,000? I suspect the answer to these questions is that, using classic Ponzi-economic principles, Shorten knows there’s plenty of money to be made off the poor and middle classes:

But smaller trusts that don’t generate enough income to pay $137,000 or more to beneficiaries would suffer under Labor’s policy, as they would currently incur average tax rates below 30 per cent. Labor reckons it will raise about $1bn a year from this group.

While being little more than blatant tax grabs, either of the above alternative measures would at least have avoided the ridiculous (and cynically political) exemption Shorten has offered farmers – who are now apparently ‘more equal’ than anybody else in business when it comes to trusts.

Better still, Shorten could well have left things alone, done none of the above, realised that the government already makes more than enough revenue and found ways to encourage people to start businesses and employ people – rather than shooting them for trying:

Trickle down may sound ‘unfair’ to some. However, it’s the only sensible option when you consider the tried and failed alternatives of ‘progressives’, communists, socialists and totalitarians – such as the gravitationally challenged ‘trickle-up’ and ever-cheerful ‘no trickle at all’ (the latter is often a consequence of the former).

Using fruit picking as an analogy, governments generally have three options when it comes to matters like this:

– encourage and reward people who take on the effort and risk of climbing the tree to pick as much fruit as possible;

– encourage people to scavenge at the bottom; or

– shoot anyone who climbs the tree.

The first option is consistent with evolution and results in the most good fruit being picked – fruit which is ultimately shared. The second and third options (often used together) feed envy, foolishly fight evolution and result in less for everyone. They also result in no-one being willing to climb the tree and everyone being left to fight for scraps.

Now where have we recently seen the outcome of those second and third options I wonder?

Speaking of Venezuela, perhaps the most galling thing is that if you type ‘Venezuela crisis’ into Google, you’ll get a who’s who of leftist publications all trying to take you on ‘a journey’ to ‘explain’ how it all came about. This is despite the fact that these nitwits: 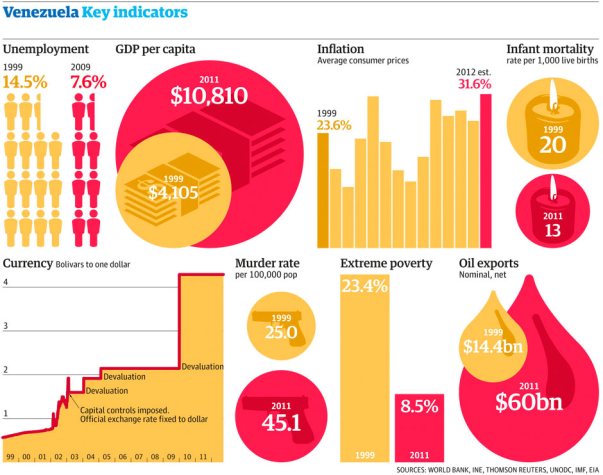 That graphic was from 2012. I wonder how those extreme poverty and inflation stats are looking today?

And who could forget our own brigade of moronic Aussie Chavistas:

“Dear President Chavez, “We, the undersigned citizens of Australia, would like to extend a warm invitation for you to visit our country. We have watched developments in Venezuela with great interest. We have been impressed by the effort your government has taken to improve the living standards of the majority of Venezuelans. [TMR: In 2012, Venezuela’s GDP per capita was at the same level as it was in 1970 and significantly less than it was in the late 1970s – think about that] “We have also noted the moves that your government has begun to make to create a society based on popular participation in all spheres of society — from the workplace up to the national government.”

And these ones too:

“Every country has its own traditions and culture and has to find its own solutions, but what Venezuela has been able to achieve in so little time will be a source of inspiration and ideas for many in Australia”.

And that’s the biggest worry of all: the majority of Australians right now are miles away from linking policies like Shorten’s on trusts and negative gearing to their final outcomes.

Outcomes recently experienced in places like Venezuela and Greece.

Outcomes which are experienced without exception in any country that thinks socialism or communism is the answer.

PS: If you’d like to follow my posts and get an email each time a new one comes out, head on over to the TMR home page and sign up (right hand side under the search bar).