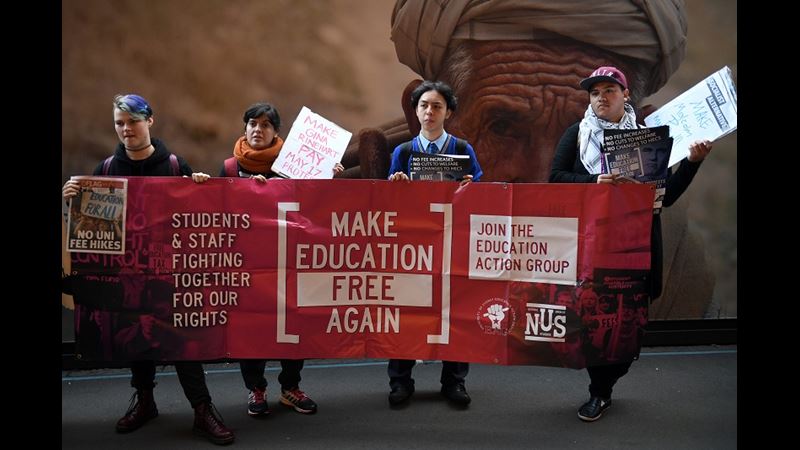 I came across this from Andrew Bolt’s blog, citing Janet Albrechtson’s highly interesting article in The Australian yesterday:

It’s compelling viewing and shows very clearly what happens when you let the tail wag the dog.

It also reminds me of a recent meeting I had at my alma mater with a law lecturer – where she lamented how the university had re-labelled ‘teaching and learning’ to ‘learning and teaching’ to reinforce that the students (and not the teachers) were the central priority. There was little to say to this. We could both only shake our heads and sigh.

For those following the decline of Western colleges and universities, the content of Albrechtson’s article regarding the Evergreen College incident is all too familiar:

To fully understand the Evergreen affair, start with the fact that this small college in Washington state has been a progressive, left-leaning university since its founding. Academics teach year-long programs where they really get to know each of their students, and vice versa. Understand too that Weinstein, who has taught at Evergreen for 14 years, is, as he told Fox News recently, “deeply progressive”. (How he came to be on Fox, not CNN or NPR, will soon become apparent.) He voted for Bernie Sanders and before that supported the Occupy Wall Street movement. He fought ­racism throughout his life. Yet none of this stopped the left turning on its own.

Every year Evergreen has held a “Day of Absence” based on a 1965 play by Douglas Turner Ward where the black population absents itself from a town for a day so the white community realises the importance of people of colour. In the play, chaos ensues. At Evergreen, chaos also ensued, though for different reasons.

This year organisers decided to ask whites to stay off campus. The implication was clear: no ally of black people would turn up. Weinstein sent an email to university staff pointing out the world of difference between a section of the population absenting itself from a shared space and a section of the population telling another section to stay away. He thought the point was obvious: on campus speech must be free and people must be free to be there regardless of skin colour. As a Jew, he was particularly unsettled by being directed to stay away.

For his anti-racist stance, Weinstein was hunted down that Tuesday morning like a modern-day witch.

As Weinstein told Dave Rubin on The Rubin Report, here is the logical end point of progressive politics. Mixed with political correctness, identity politics, woolly notions of “equity” that no one bothers to define, progressivism has become a retrograde movement, a kind of reverse racism unravelling the gains of the civil rights movement that sought to erase race as a determinant of human worth. “We should be anti-supremacist,” Weinstein told Joe Rogan in another of the many ­interviews he’s done to explain the significance of that day at Evergreen. Left-liberal media hasn’t ­approached him, he says. Not CNN or NPR or The New York Times.

A trip to the college’s Wikipedia page also yields the following:

The Evergreen State College is a regionally accredited public liberal arts college and a member of the Council of Public Liberal Arts Colleges, located in Olympia, Washington, US. Founded in 1967, Evergreen was formed to be an experimental and non-traditional college. Full-time students enroll in interdisciplinary academic programs instead of classes. Programs typically offer students the opportunity to study several disciplines in a coordinated manner. Faculty write narrative evaluations of students’ work in place of issuing grades.

Evergreen offers a Bachelor of Arts in Liberal Arts and Bachelor of Science, Master of Environmental Studies, Master of Public Administration, and Master in Teaching.

Suffice to say, the ‘experiment’ has failed miserably.

However, one thing that has been completely missed is the failure of the likes of Weinstein to accept any shred of responsibility for creating this mess. On reading about this situation it’s easy to fall into the trap of thinking that the Weinsteins of this world are victims or even some sort of now-useful allies. They’re not: they’re among the chief culprits.

When you saturate young and impressionable students with a purported holier-than-thou political correctness that is hypocritical, logically inconsistent and impossible to implement and sustain – and treat those students as customers, but don’t make them pay like real customers for good measure – then don’t be surprised if your ‘customers’:

The children in the above video did what they did because it is exactly what they were trained and financially incentivised to do.

When it comes to higher education, there are two broad extremes when it comes to placements and funding – either of which would provide far better outcomes than those we’re seeing today:

I’m not advocating either of these extremes. I’m simply saying that each one would be better than the current mess we have where we:

It would certainly have avoided the kind of ludicrous rabble you see in the video above and in countless other (remember QUT?) higher learning institutions:

Of course, common sense says that you take the best parts of both extremes and partially fund some degrees for those demonstrating the necessary ability.

However, what has happened in practice is that the worst possible system has been implemented where just about everyone is ‘entitled’ to go to a university and treated like a customer – but not made to pay like a customer.

I constantly see people blithely wondering why it’s harder to get a job out of university these days – but can anyone seriously be surprised at this result? What else would you expect when there is an oversupply of a bad product?

One thought on “You Reap What You Sow”