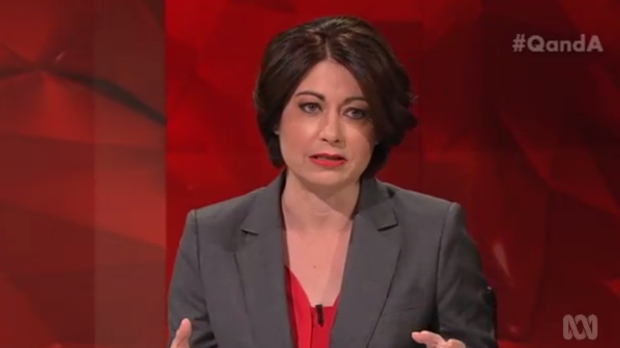 This is the disgraceful Terri Butler. On 21 November 2016, Butler appeared to forget that parliamentary privilege doesn’t extend to ABC’s Q&A studios when she said the following about Calum Thwaits:

“This is the situation. And we never found out because it was not determined,” she said on Q&A. “I’m saying this is what the allegations were and the matters were not determined.”

When told that Thwaites had repeatedly ­denied it was his Facebook post, Butler said: “He would say that, wouldn’t he?”

(NB: Thwaits had recently had Cynthia Prior’s completely baseless claim against him – that he’d used the n-word in a Facebook post – summarily dismissed by the Federal Court).

To which TMR concluded (just four days ago):

Butler is about to find out the hard way that this matter was indeed ‘determined’: summarily by a judge of the Federal Court of Australia; and judges do not ‘determine’ things of this nature summarily unless the applicant’s allegations have no reasonable prospect of success.

This is Butler getting her well earned medicine:

Labor frontbencher Terri Butler has settled a defamation lawsuit with Queensland law student Calum Thwaites over what some described as her “racist smear” on national television.

In a statement posted to her website on Thursday, Ms Butler said she had agreed to make a “modest payment” to Mr Thwaites, and a contribution towards his legal costs.

Fairfax Media understands the settlement is five figures and the services of Mr Thwaites’ lawyer, Anthony Morris, QC, would be somewhere between $5000 and $10,000.

In her public apology, also a condition of the settlement, Ms Butler acknowledged the court had heard evidence Mr Thwaites was not the author of the offending Facebook post that appeared under his name.

“Your legal representative, Mr Morris, QC, has described you as a victim of malicious identity theft or a prank, which I accept,” she wrote.

“There should be no suggestion that you were responsible for the Facebook post, or that your denial was anything other than the truth.

“Equally, there should be no suggestion that you are racist, or bigoted. I offer you my unreserved apology for enabling those meanings about you to be conveyed, and for the distress and damage to your reputation caused as a consequence.”

Ms Butler told Fairfax Media she was happy to waive the confidentiality agreement and release the figure if Mr Morris contacted her.

She said she had “no expectation” of the ALP picking up her own legal bill, which was to Maurice Blackburn, her former employer.

What a grub. Firstly, notice how there’s no mention of who’s picking up the bill for the settlement sum? Secondly, Butler saying that she has ‘no expectation’  that the ALP will pick up her legal bill is not the same thing as saying she would pay the bill herself – or that there isn’t a bit of quid pro quo between Maurice Blackburn and Labor to write the thing off.

These people can’t even lie in bed straight.

And where was the most basic of follow up questions from the journalists: ‘So will you be picking up the entire bill yourself Ms Butler?’.

6 thoughts on “Butler Finds Out the Hard Way”