Yet another ‘renewable’ energy project.

Yet again, it’s one of those laughable wave energy farms.

Yet again, we have a government itching to stuff the ”project’ full of subsidies.

Yet again, there’s a highly dubious tender process behind it.

And yet again, the whole thing is falling over in a pathetic heap:

Doubts were last night hanging over the viability of a troubled Albany wave power project backed with $15 million of taxpayers’ money [TMR: no, it’s $15.75 million. If you’re going to round, at least round to the nearest number. Seriously, did this journalist graduate from primary school?] after the company behind the proposal left it to the 11th hour to prove it could fund the work.

Carnegie Clean Energy was yesterday facing a deadline to show it could fund its $26 million share of the $53 million Albany wave energy plant in order to obtain the next instalment of a State Government grant. The company waited until moments before the cut-off to submit its paperwork, although it had not updated the stock exchange by the time The Weekend West went to print.

Under an agreement with the Government, Carnegie is entitled to a $15.75 million grant provided it can meet its share of the project’s funding costs.

So far $2.65 million has been handed over by the State.

Last night’s developments were the latest in a saga stretching back to February, 2017, when Labor promised to help fund WA’s first commercial wave power project off Albany.

[TMR: something cannot possibly be ‘commercial’ if it’s subsidised by the government. $%^#]

Carnegie won the tender but has been mired in difficulty since, posting a $64 million loss last financial year [TMR: a renewable energy company entirely reliant on government subsidies having financial difficulties? Meditate on this, I must]

Who in their right mind could possibly think that this kind of power generation would be economically viable? Ever?

Some readers may not be familiar with wave energy farms. That’s ok, TMR can help… with pictures! 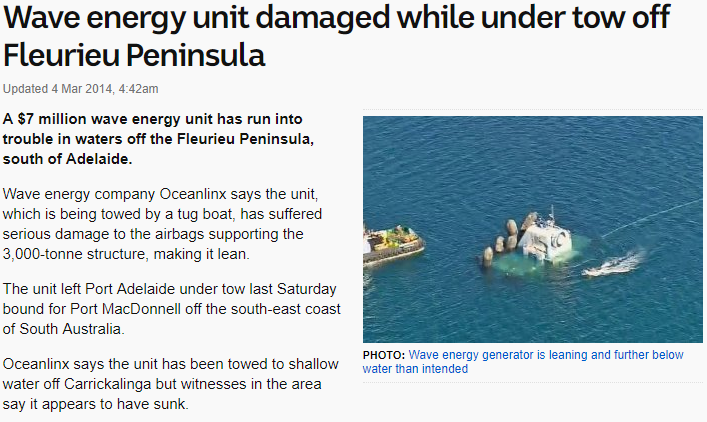 (PS1: Yes, that was ABC euphemistically using 11 words for its caption when various single-word descriptions would have worked far better).

(PS2: the feature picture to this post is one that they tried in Illawarra).

As for this latest sick green joke, the intended cost of $53 million comes with the aim of meting out 20MW of shock and awe – or about $2.65 million per megawatt if you’re interested in that sort of thing.

By comparison, Tasmania’s Tamar Valley gas power plant, which Tasmania built but refuses to use, cost about $230 million to build and has a capacity of about 388MW. (Regular TMR readers will know why I picked this as a comparison). Again, for those who care about this sort of thing, that’s about $0.6 million per megawatt of capacity. Even South Australia, home of the Royal Adelaide Hospital, reckoned it could build a 250-megawatt gas power plant for about $360 million ($1.44 per megawatt).

Isn’t it funny how supermarkets are required to provide pricing per unit on their products, but governments aren’t required to do the same? Why is that?

The only potentially good news is that the whole project may end up falling over before it really gets underway.

We can only hope.

You might scoff at the fact that this particular boondoggle may ‘only’ amount to about $50 million. The problem is that this is merely the tip of the iceberg and governments all over the world are doing it – with our money.

When will these imbeciles learn? The answer, of course, is never – because they know exactly what they’re doing and why they’re doing it.