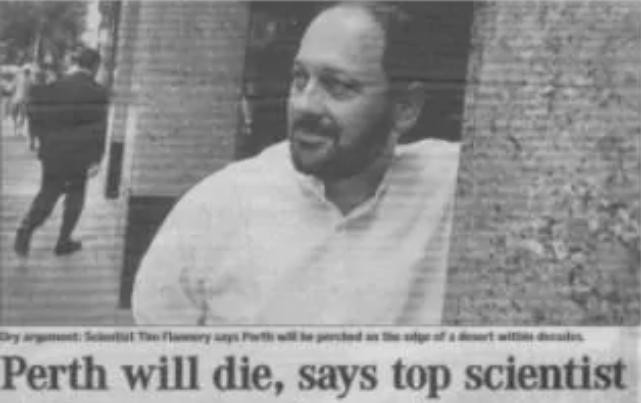 As parts of Australia’s east coast experience record low temperatures and Perth continues to experience healthy amounts of rainfall, I can’t help but remember the time in 2004 when Tim Flannery said that there was a ‘fair chance’ that Perth would become the 21st century’s first ghost metropolis – based on what appeared to be a two month, self-selected crash course in reading some stuff he found… and the subsequent soiling of his pants:

Climate change would diminish the environment of Sydney and its hinterland, and it only had to look to Perth’s experience.

“I think there is a fair chance Perth will be the 21st century’s first ghost metropolis,” Dr Flannery said. “It’s whole primary production is in dire straits and the eastern states are only 30 years behind.”

He said climate change tended to move in steps. In 1976, when the first step occurred, the south-western corner of Western Australia lost 20 per cent of its rainfall, and its catchment fell from 340 gigalitres to 111 gigalitres. The average is now 160 gigalitres. In 1998, when the second step occurred, the world experienced the worst El Nino effect and the death of 17 per cent of its coral reefs. South-eastern Australia was hit by drought .

Dr Flannery said he had spent the past two months reading “everything I can get my hands on” about climate change, and had been horrified by what he had learnt.

Three years later in 2007, Flannery was at it again, doubling down on his prediction – albeit not quite as confidently this time around – because, apparently, desalination plants:

AUSTRALIAN of the Year Tim Flannery is sticking by his warning that Perth could become the first ghost metropolis of the 21st century.

But the outspoken environmental scientist says it’s our addiction to coal, not just water, that is jeopardising our future.

[TMR: using this logic, I guess this also means that I’m addicted to breathing air. On reflection, I have to admit that I’m rather frivolous with my consumption of it. Are there any meetings I can go to for this?]

Dr Flannery said he originally made the dire prediction about Perth based on its scarce water supply.

“When I said Perth could become the first ghost metropolis, that was true, but the Government acted and got a desalination plant going,” he said. “The city could have run out of water if it wasn’t for the desal plant.”

While the immediate crisis is over, Dr Flannery said water worries would continue to plague southern WA more than other parts of Australia.

Ah yes, desalination plants. You know, the same as the ones being ‘used’ in Victoria, New South Wales and, of course, South Australia. (NB: Tasmania probably would have gotten involved too if it didn’t have a far more entertaining way to waste water, money, time and a gas power station simultaneously).

Anyway, as for that Perth ‘running out of water’ thing, given that:

I think it’s safe to say that Tim’s ghost town prediction was a big steaming load of hooey and that any one or more of the following must have been true:

By 2011, the ABC decided to join the ‘Perth’s gonna die’ party by running a story on how Perth was ‘set to become the world’s first Ghost City’ – based solely on the passing opinion of an unnamed Fox News ‘anchor’ at the time:

According to some predictions, Perth property prices could be worthless in the future if Perth becomes the world’s first ‘Ghost City’.

[TMR: seriously, what kind of inane statement is this? It’s about as insightful as saying ‘Bill’s life could cease to continue if his heart stops beating’]

Perth is set to become the world’s first ‘Ghost City’ according to a long-term weather forecaster and a news anchor.

The doomsday forecast for Western Australia’s capital was made on FOX News in the United States.

During an interview a FOX News anchor interpreted a global climate forecast map with drastic consequences for Sandgropers.

“It seems as though Perth, Australia, is a real cautionary story for us. Tell us what’s happening in Perth and how Perth could become what’s called a ghost city?” asked the news anchor.

“I’m reading here that unless drastic action is taken, Perth could become the world’s first ghost city – a modern metropolis abandoned by the 1.7 million people there for lack of water,” she said.

The interviewee, US senior climate forecaster and drought expert Ed O’Lenic, was slightly more restrained when describing the future of our city.

“Water is becoming an increasing issue in the city of Perth and there is some concern about the sustainability of the city.” Mr O’Lenic said.

“Droughts tend to build over a relatively long period of time, it takes months, seasons and even years for a drought to develop; and they’re always changing.”

Bureau of Meteorology Forecaster John Relf said a cloud band hovered over Rottnest Island dumping 32.2 millimeteres in half an hour and 66.8mm in a 24 hour period.

However, Perth missed out on much of the rain recording only 4.2mm in the same period.

After Perth’s record breaking heatwave, low dam levels and more dry conditions predicted – the crazy idea of a creeping drought may not be so crazy after all.

As for that nuisance called reality, let’s fast forward to July 2018 and see how, yet again, it’s stubbornly refusing to co-operate with the global warming agenda:

Of course, all someone has to do now is tell WA’s Water Corporation about this ‘breaking news’:

Declining rainfall eh? I can only guess that they must have ‘homogenised’ the above data before reaching that conclusion.

As for Flannery, how he can show his face in public these days is simply beyond me. Regardless, when it comes to ghost towns, I’d much rather listen to The Specials…

3 thoughts on “Why Isn’t Perth a Ghost Town Yet?”