Every year, the government seems to make it harder to really see what it’s doing with our money in the budget – whether by renaming things, requiring an extra click or two to access various papers or simply by the tried and true method of burying its sins deep into the treacherous abyss.

TMR refuses to be beaten.

If you want simple, no-nonsense budget analysis that can’t be found anywhere else, read on.

All figures have been sourced from the official 2017-18 budget papers and are presented so that you can form your own opinion.

I’ve already shown on numerous occasions that the government doesn’t have a revenue problem.

Following this year’s budget, nothing has changed and the government’s revenue gravy train is set to roll on (figures sourced from pages 11-6 and 11-7 here):

It’s incredible that you will not find a graph like this anywhere in the budget papers or anywhere else on the internet. It should be compulsory for every politician to have it posted to their pinup board and on the back of their toilet door.

Just stop and look at that last green bar for 2017-18 and see how much larger it is than the previous green bar. Now look at the last time one of those green revenue bars increased by a similar amount since the government started racking up debt…

This year’s tax victims are those nasty foreign investors;  anyone who has superannuation, a shareholding in, deposit, mortgage or employment with a big bank; anyone who pays the Medicare levy (yes, that means you); ‘evil’ multinationals who don’t pay their ‘fair share’; and, of course, smokers.

As you can see, the above graph clearly shows that the government is trying to ‘fix’ the budget by taxing even harder – and continuing to spend money it doesn’t have at pretty much the same rate it has for the last 10 years. In other words, doing what Labor would do.

Any time someone tries to dribble some nonsense about ‘percentages of GDP’ as justification for this budget being ‘ok’ or ‘sensible’, just tell them that the graph doesn’t lie.

The analysis here couldn’t be simpler: look at spending for the financial year about to end (2016-17), compare it to the budgeted spend for the next financial year (2017-18), see where the biggest changes are – and then ask ‘what the hell are you doing with my money and why you nefarious bastards?!’.

NB: looking at anything beyond the upcoming 2017-18 financial year (i.e. forward estimates) is generally pointless. Governments are already worse than the IPCC when it comes to forecasting.

For each major government function, the following table shows:

For further ease of reference, the functions have been ordered by percentage change (I wonder why the government doesn’t do this anywhere in the budget papers?).

(Figures are in millions of dollars).

The first thing to note is that the government intends to increase overall spending by 3.0% ($13.5 billion).

That aside, the following may have also come across your mind on reading the above table:

‘Other purposes’ – a primer

For those not familiar with ‘other purposes’, allow me to put it in the government’s own words:

Other purposes — the increase in expenses from 2017-18 to 2020-21 largely reflects growing general revenue assistance payments (largely GST) to be made to the States and Territories, increasing public debt interest costs and the conservative bias allowance component of the Contingency Reserve.

If you’ve been a regular reader of TMR’s budget analysis, then you’ll probably have a fair idea on what’s coming on this. But first, let’s dig a little bit deeper to see where the money’s going.

The following expanded table provides a further breakdown on spending for each of the above functions.

In what a hard leftist would probably describe as sheer lunacy, TMR has ‘radically’ put everything in the one table and organised the components of each function according to percentage change (someone send me to The Ministry of Love already):

(Figures are in millions of dollars).

Now that we have some more information, let’s see what else there is to notice.

Other purposes – the main course

This category is always the star of the show these days:

Expenses under local government assistance relate to financial assistance grants made to the States and Territories and consist of a general purpose component and an identified local road component, both of which are untied, allowing councils to direct the grants to local priorities [TMR: aaaaarghhhh!]. The expenses are expected to decrease by 66.0 per cent in real terms from 2016-17 to 2017-18, reflecting the bringing forward of the first two instalments of the 2017-18 Financial Assistance Grants program for payment in 2016-17. Further information on Australian Government assistance to local governments can be found in Budget Paper No. 3.

And here I was thinking that climate change was going to lead to more severe weather events and bushfires. Or is it the case that our reduced emissions are already reaping the benefits by reducing natural disasters?

(NB: in the end, the government managed to defer about $1 billion of this spend).

This year, the overall disability spend is set to go up by another $6.8 billion (an increase of 21.5%) – a further sign that the government has already completely lost control of the NDIS. If anyone can tell me what’s actually been delivered under this scheme for the $10 billion or so spent so far – along with who qualifies and who doesn’t – that would be great.

Meanwhile, the forward estimates don’t make for better reading, with another $20 billion being added to the overall disability bill over the next four years – bringing the total annual disability spend to a cool $50 billion ($20 billion of which will be for the NDIS alone – by which time about $68 billion will have been spent on the project):

An increase in the Medicare levy was somewhat inevitable given that:

Don’t worry, if you’ve got that Groundhog Day feeling, you’re not crazy (yes, that’s right, the Medicare levy was already increased to ‘fund’ the NDIS back in 2013/14).

Of all the people to throw a bit of extra charity to, you would think our veterans would be near the top of the list – especially while the government is on a welfare spending spree. Right? 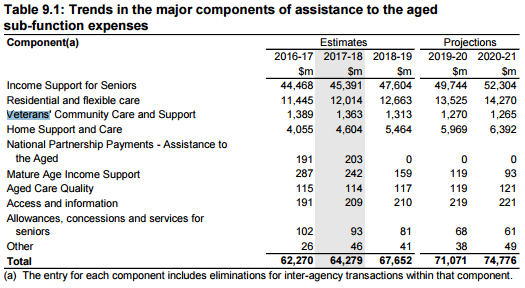 As it turns out, according to the government, we’re just plum out of veterans (apparently):

The estimated decrease of 13.3 per cent in real terms from 2017-18 to 2020-21 for veterans’ community care and support is mainly attributable to the decrease in the number of veterans and relevant dependants accessing residential aged care.

This year, I have a special section dedicated to things that just simply don’t add up or make any sense whatsoever.

Aside from the $8 billion being spent overall, if someone could sensibly explain how this set of circumstances came to be, that would also be great.

Lastly, for some reason, I just couldn’t get this song out of my head as I was writing this:

As it turns out, the fourth verse says it all: