TMR’s US election diary takes the form of an SMS conversation with reader Peter Part.

1.18pm (AEDST) – TMR: I reckon Hillary will probably win, but Trump at least looks like a chance. Florida, Michigan and North Carolina are all within his grasp.

PP: I am watching and think Trump could do it.

TMR: I’m watching on Sky and their coverage is insufferably biased to Clinton. I just had to listen to how Clinton is a great mother and how it would be inspirational to have a woman president (David Spears).

TMR: I want bloody numbers, not this MSM crap!

PP: Agree completely. I think they short change us on purpose.

TMR: Why does Sky have Van Onselen, Keneally and Spears – and no conservatives -on its panel?

TMR: FMB, Sky’s now relayed over to the ABC (US) coverage. This is pretty dire stuff.

PP: I have to watch this on my phone in a Chinese restaurant. How’s Florida?

TMR: Apparently, the early Michigan deficiency will be made up by Clinton because good democrat voters show up to vote at 4.30pm-5.00pm!!! Trump’s screwed!

PP: Who says that?

TMR: Some democrat strategist in Michigan.

TMR: Indeed. The ABC panel is now saying that urban minorities have been very happy with how America has been run, while white farmers are not. Therefore this whole election is about smart city people vs dumb racist farmers. Do these idiots know where their food comes from?

PP: I actually see a realistic chance for the first time. Should Hillary lose, her expression would be priceless. 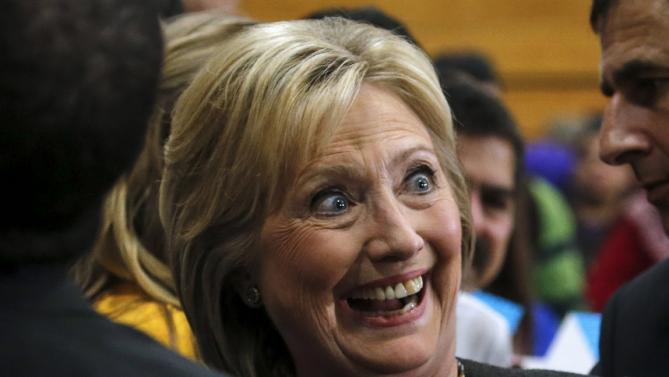 TMR: Yet another leftist computer model that hasn’t worked out.

TMR: Watching the looks on the Sky and ABC panel members’ faces is already priceless. The tone has definitely changed. A guest Sky panellist (don’t know her name… yet) just said she feels sick and that sexism on the ground is apparently ‘playing out’!

TMR: This conversation is going up on my blog by the way.

PP: Probably time to cut back on the swearing.

‘This is a disgrace to America’.

TMR: He just fell off.

PP: I never liked this guy.

TMR: Not many people do.

2.22pm – TMR: Markets are officially wetting themselves! Some even suspended.

TMR: Peso down 10%! Must be factoring in the cost of the wall.

TMR: Market capitulation is no different to cockroaches running around everywhere once they’ve had the rug lifted on them.

PP: Trump voter turnout seems a lot more than expected. I am hopeful my beers will be consumed in celebration tonight!

PP: Just read about Colorado. It’s all about Florida and Michigan from here.

PP: How did democracy do this?

TMR: I think he may need some emotional help.

PP: Trump’s lewd remarks didn’t seem to matter as much as the press wanted us to believe.

TMR: Funny that. How could democracy have known this?

TMR: Not one Sky panelist has had anything positive to say about Trump.

PP: No wonder with this panel. Antony Green just called it for Trump.

TMR: They’re all having a collective meltdown about it too.

PP: It’s not looking done yet but looking better than I dared hope.

TMR: How much did the media try to brainwash us otherwise?

TMR: About to be called to Trump. My lunch is tasting so good right now.

TMR: Hillary’s up 190-187 so far, but it’s meaningless unless she can take back Michigan.

TMR: ABC (US) has gone further and now blamed non-college whites for what has happened so far.

TMR: Scratch that – non-college white men not ready for a female president are to blame.

PP: Take out all those non-college white men, what are lefties left with?

TMR: Black and hispanic lesbians with degrees in gender studies?

TMR: Florida has now been called to Trump!

PP: I’ve just read that the Senate majority will be Republican.

TMR: It almost certainly will.

PP: Pennsylvania will be interesting.

PP: Hospitals will be overwhelmed with nervous breakdowns of many lefties.

TMR: You mean that the government didn’t set up enough safe spaces for them?

3.26pm – TMR: Keneally is asking who we should blame for this. How about Hillary’s corruption? She really is dumb.

3.34pm – TMR: Sky adds Brendan O’Connor to the panel with Keneally now ‘moderating’. What a joke. He parrots the ‘whites without a college degree’ line.

3.40pm – TMR: Keneally still holding out hope on Sky for a Clinton win ‘for the sake of the human race’. Shameless, I thought Sky was a news channel.

TMR: Sky and Spears now talking about whether Trump could be impeached before he takes office. Am I really hearing this?

PP: The problem is the lack of alternative news channels. How the left hijacked the media is astonishing.

TMR: 244-209 to Trump now. Can’t wait until he calls the special prosecutor on to Hillary!

PP: Any pictures of Hillary yet?

TMR: None yet. She may be getting medical treatment and some pills to get her through her concession speech.

TMR: It couldn’t hurt. Julie Bishop is now on Sky. Tough to tell what she’s feeling about all this amidst the brow lifts. She seems unhappy:

TMR: Spears now concerned about Trump’s age even though Hillary is only one year younger. He and the Sky panel are just embarrassing themselves now.

PP: Trump may be a Russian sleeper if you keep listening to these halfwits.

TMR: It’s only a matter of time now!

5.58pm – PP: I think it’s done now. Clinton would have to win all the remaining seats. Wisconsin will seal it.

TMR: I know who I’d rather be right now. Not the one going to jail.

TMR: She did say ‘let’s make it happen!’. Wisconsin is lost for her. No way she makes up a 49-46 margin there with so much counted.

PP: Did you watch their respective speeches last night? In hindsight, I now think Hillary was worried then already.

TMR: Indeed, She made a lot of last minute trips to Michigan even though the mainstream polls had her safe there.

TMR: Funny how what they know and what we’re told are so different.

PP: Looks like Michelle and Gillard clearly didn’t cut it.

TMR: You’re just one of those white guys that hates women. How could you? Next you’re going to tell me that you don’t have a college degree.

PP: Must be according to the ones that lost.

TMR: I forgot ‘racist’ and ‘hater’. I think we’re those things too. I must admit, I had no idea until the TV told me.

PP: I hope the Clinton Foundation will now get the scrutiny it deserves.

TMR: It better. Then I can stop hating.

TMR: Listening to the ‘pundits’ over-analysing the reason for the result in infuriating. Is it really that hard to understand why Americans preferred the rude, lewd candidate to the crooked incompetent one?

PP: Considering the opposition from his own party, Trump’s success is more than remarkable. He proved to be so much smarter.

PP: The deplorables are now ruling the world!

TMR: I couldn’t be deplorably happier. Trump HQ supporters are now chanting ‘lock her up!’.

TMR: Clinton is refusing to concede. This is classless.

TMR: What was all the hype about Trump not accepting the result if he lost? How Clinton can do this is simply outrageous. It won’t do her prospects of staying out of jail any good.

PP: So typical of this hypocrite.

TMR: That Trump will have to speak first is ridiculous.

PP: Trump on his way to his election HQ. Switzer says: ‘he’s erratic… it’s hard to predict whether he’ll put into practice all the various policies he’s championed’. What are they going to say next?

TMR: Haven’t the media realised that the jig is up? Everyone knows thay’re biased liars and they’re having none of it. Yet they keep batting on.

6.30pm – TMR: Paul Murray is now mercifully on Sky and sorting out the leftist rabble that had been running things all day. Bless him.

PP: They can’t bring themselves to say ‘the people have spoken’. Just imagine Trump in Clinton’s situation right now. Unimaginable if he did the same.

TMR: Finally, bring it on!

TMR: Something tells me that there won’t be a carbon tax under the government that he leads.

PP: A remarkable moment in my life.

TMR: What a gracious speech. The exact opposite of the divisiveness the ABC (US) predicted.

PP: Just shows how biased they all are. I love his speech and it makes me confident that he will be a great president.

TMR: I actually have hope in a politician for the first time in a long time.