As Perth completed its coldest September in 120 years of record, it didn’t take long for Jo Nova to be on the case:

In the last 120 years in Perth there has never been a September as cold as this one. We know that thanks to Chris Gillham, who has been tracking Western Australian weather in detail for years at WAClimate.net.

The headline in The West Australian today was Perth shivers through it’s coldest ever September. For some reason (I can’t think why) the extreme weather journalists did not mention climate change (has that ever happened on a hottest ever record story?). It’s so unusually cold here that wheat farmers, only weeks away from harvest*, are struggling with frost damage on crops. They are making snowmen from the frosts. It is supposed to be rapidly heating up but it is three degrees below normal.

Given the freak weather, Will Steffen immediately announced that “This is a prelude to a disturbing future. And it’s only going to get worse if we don’t address climate change.”  No. Wait. Scratch that. That was South Australia, where one bad storm was caused by coal fired electrons. A record cold month is just weather.

That was just Perth. How did the rest of Australia fare? Firstly, let’s have another look at the featured image to this post – which is the Bureau of Meteorology’s prediction for September 2016, issued just days before the start of the month:

Looks ominous doesn’t it? Almost everywhere has at least a 50% chance of frying, with many parts having a 60%-80% chance.

As for the final outcome: 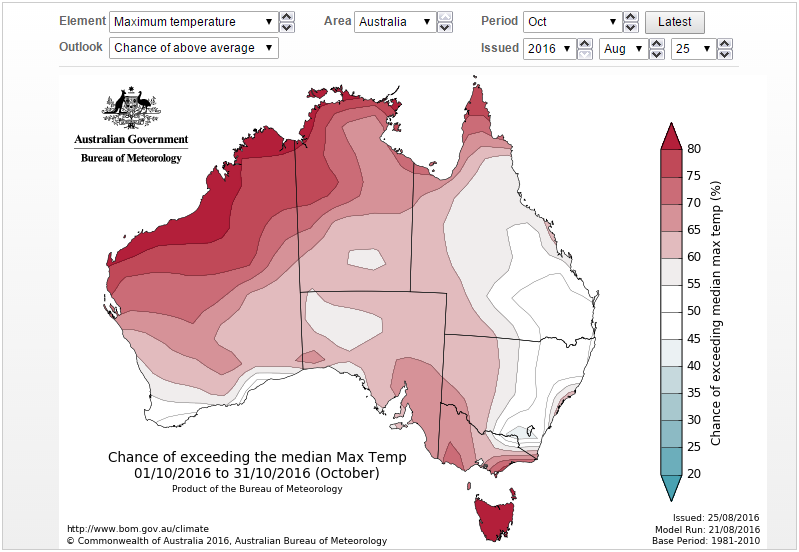 And here’s their revised prediction made in September 2016 – after they had some time to think about that nuisance called reality:

Isn’t it amazing how much things can change in a month?

I get it: it’s very hard to accurately predict the temperature a month in advance, let alone a week in advance. Given this, it’s high time that people stopped trying to tell us with a straight face what it’s going to be like over the next 5, 10, 50 or 100 years.